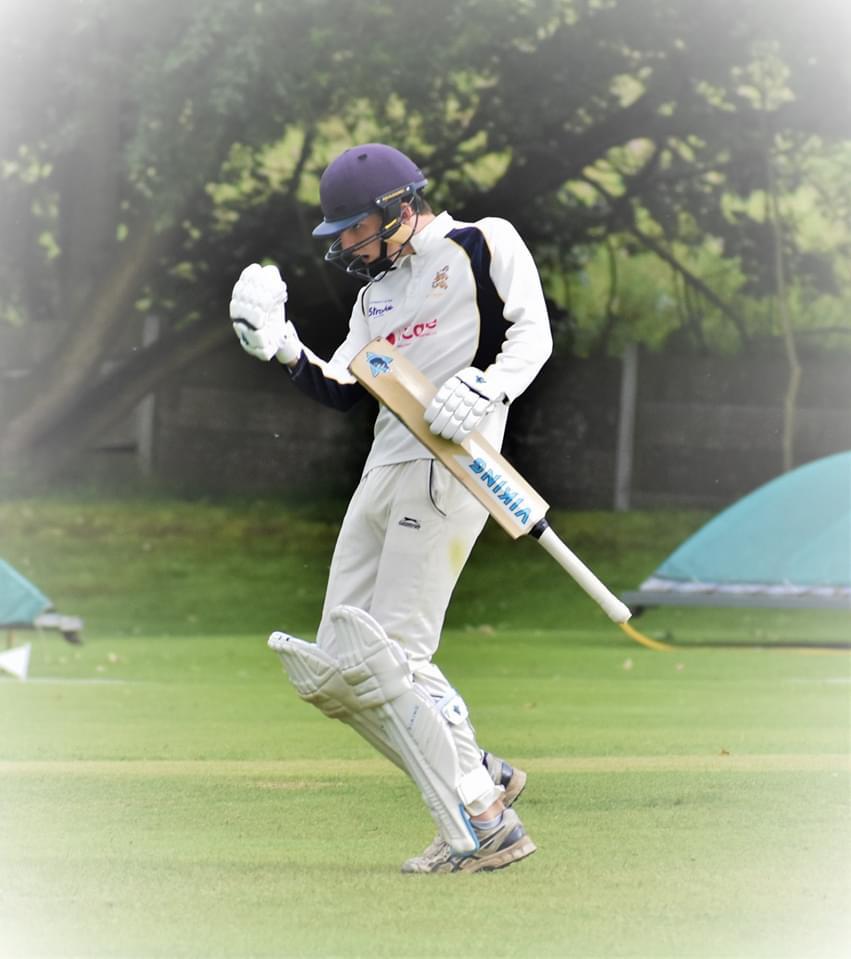 Stretford bounced back from the dissapointment of defeat at title contenders Mottram, with a 47 run victory at the
sun soaked hilltop home of Austerlands on Saturday. The win was set up thanks to a 7th wicket partnership of 90 by the resolute Matt Armstrong (98) and Tom Coulson (35) who rescused team from a perilous 117-6 and an unlikely bowling hero, Mike Murphy (4/52). The final total of 242 proved too much for Austerlands despite fielding the league’s leading run scorer Imran Rafiq who has already coasted to 1200 runs this season.

Skipper Ryan Williams won the toss and elected to bat on a pitch which offered something to belie the glorious weather and surroundings At 20-3 the decision to bat was being questioned by Statler and Waldorf perched on the Western Terrace at the fun-sized, thwack-enducing, Saddleworth ground.

Matt Armstrong continued his quest and when be was joined by Thomas Coulson the pair powered on to 211-7. Coulson departed after unleashing an array of trademark power shots. Quietly, Armstrong continued on his inexorable cruise to his maiden century but fell in the last over attempting to score the two runs needed. The total of 242 was the result of an excellent recovery but was probably par at the Austerlands ground.

The home side`s reply took two early knocks as skipper Williams castled both openers to bring Pakistan A batsman Rafiq to the crease. After he had been completely beaten by his first ball he accumulated runs but was kept relatively quiet by good spells from Williams, Coulson and Jack Blackwell.

At 144-2 and coasting Rafique inexplicably chipped a catch to Williams at mid-off from the bowling of Mike Murphy to end a partenership of 110, and his partner, Melling,  fell on 49, trapped in front by an arrow straight ball from Coulson in the next over.

Stretford sensed victory and it came with the score on 195 as Williams (5/51) and Murphy added their fifth and fourth victims respectively.

A great and hard earned win due to an all round team effort. Armstrong reflected on the performance and was quick to play down his match winning knock; “It was very long, very warm, very tiring but a win nonetheless and that’s all that matters, Allez les blues!”

A top of the table clash at Dukinfield next week is eagerly awaited.

A battling 58* from Ben Riddell was not enough to save the 2nXI from a 5 wicket defeat at the hands of league leaders Bury on Saturday.

After slumping to 9-3, Jamie Cotton (27) and Pav Aqeel (22) dug in; the run rate lower than the Mariana Trench. Riddell, Lomax and Uwais Siddique (23) upped the tempo, the home side finishing with a respectable 171 for 8 from 45 overs.

Alex Bowman (1/23 from 10) captured an early wicket to give Stretford hope but a patient 42 from J Mitchell, Z Khan (23) and S Hashmi (32) guided Bury towards the target relatively unscathed. Jamie Cotton’s off-spin stalled the Bury progess chipping in with 3/52 from 14.