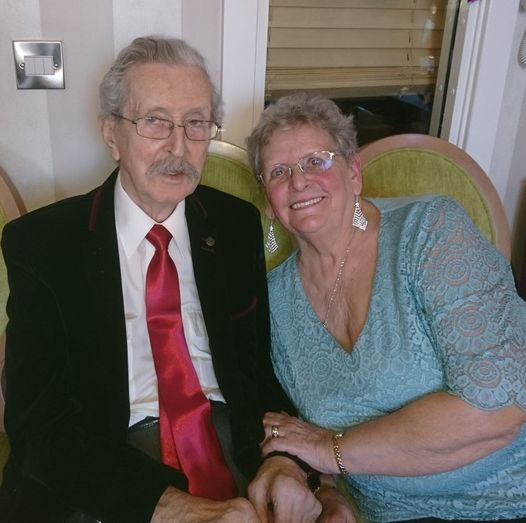 Sad news to bring to members as I can report to you that Pat Fish died yesterday, aged 83, in hospital surrounded by her family.

Pat made up one half of a formidable partnership with her late husband, Life Member, John Fish to whom she was married for 63 years. They moved to Stretford from the White Rose in 1961 but if truth be known, she was a club stalwart in her own right.

The whole Fish family have contributed to Stretford  CC enormously to the development of Stretford Cricket Club as it is today. Sons Gareth, Stuart and Adrian all played for Stretford and, together with John, were very much hands on in helping to build the club. Daughters Kath and Heather never too far behind cheering on the club. Pat gave her services to the club as a cleaner for many years – a thankless task and mostly unseen.

She struck fear into the heart of many younger members, waking them up from a deep Theakston induced slumber with a sharp dig of a Dyson underneath the pool table on a Sunday morning. The cricket club is a real safe green space and therefore it is often the place where youngsters like me learned how to mishandle our drinks. Pat would turn up to the club every Sunday morning, with the lounge in a terrible state and spend hours dealing with the debris from the night before. I’m sure she understood. This demonstrates what a selfless, loyal and committed person she was.

Both Pat and John was always present at the Adrian Fish Junior Trios, an intraclub tournament  held every year in Adrian’s memory. They provided refreshments and trophies. They both really enjoyed seeing the development of junior cricketers coming through the ranks into senior teams and demonstrating teamwork, a quality ingrained into their own family. More obviously, the trios was a chance for family and friends to join together in celebration and Pat in particular always had a real glow at the event. She was so proud and protective of the people closest to her.

I really started to get to know Pat when I left the junior ranks and became involved with Management. I would pop round to Cressingham Road to assist Stuart with the quality yet Northern Rail-like Club Handbook and Pat would bring in Yorkshire Tea and ask how the family was. She was kind spirited and loyal and not really that woman who used to jab me with a Eubank at the cricket club. In their own unique way both Pat and John almost treated me as one of the family after I provided best-man duties for Stuart when he married Nicola. It was clear to see that she loved the time she spent with the grandchildren when Alex, Archie and Johnny joined their shoal.

Behind every great family there is that lynchpin figure. She was such a strong person with such a great sense of duty (but I’m told was an extremely difficult back seat driver) During the height of the pandemic husband John died unexpectedly from a heart attack. Pat herself undergoing treatment for cancer at the time had been moved into a Hospice and it was touch and go whether Pat would be able to attend his funeral…………………was she there? You bet she was.

“I’m so glad you were able to make it” I said to Pat; my face adorned with a three ply mask

These were the last words Pat ever said to me. Probably very fitting.

The club would like to pass on condolences to all Pat’s family and friends and while the end of an era has been reached we at Stretford Cricket Club will be certain to celebrate the tremendous contribution made to the club by Pat.

Funeral details will be made available when known.

4 thoughts on “Pat Fish – An Obituary”