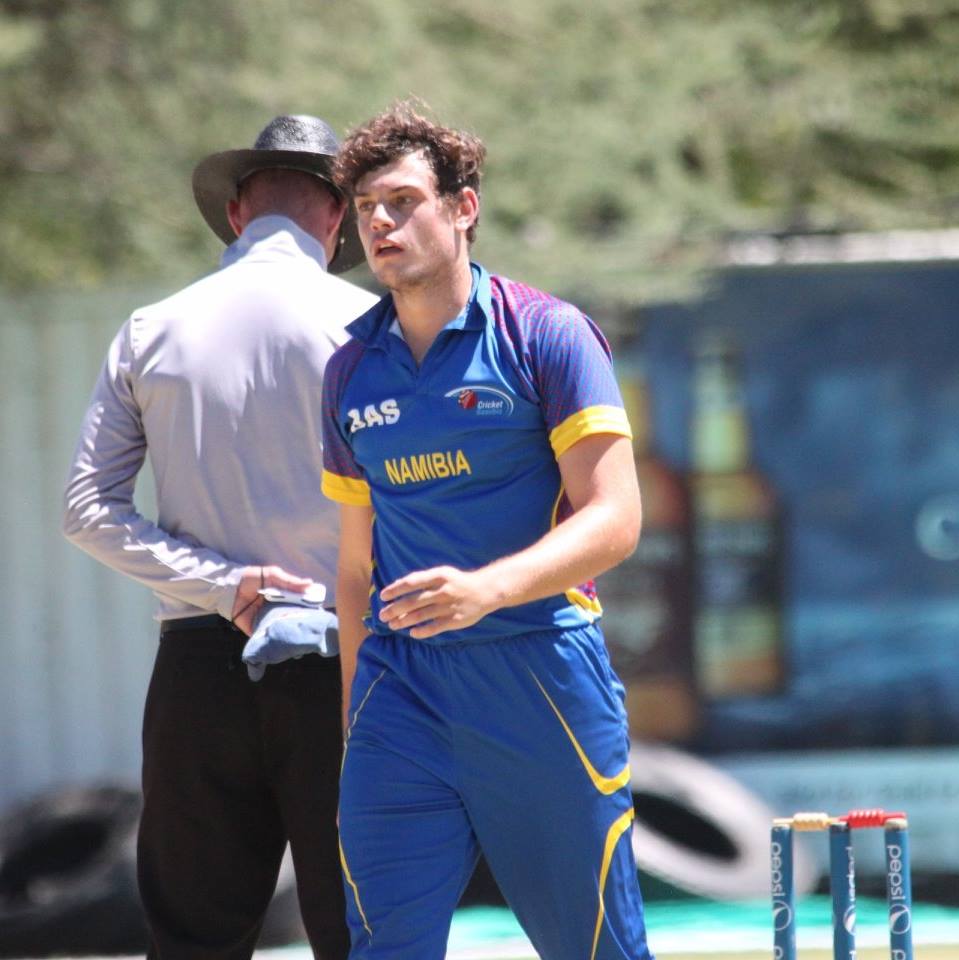 Danie van Schoor played for Stretford in 2015 and 2016 and is another member of the southern-African contingent who enjoyed stints at the club. Danie took time out from his training with the Namibia national team and work to chat about his road to Manchester and being part of the national team

The van Schoor family has a fine cricket pedigree with father Melt, uncle Ian, brother Raymond and cousin Anneri all playing for the National Team. As a result Danie was always going to be involved in cricket from a young age

“ I was taken to the field as a young kid, like 5 or 6 years old and I would be playing with my toys next to the field watching my dad play. I didn’t really play any mini cricket. When I reached the age of 8 or 9 that is when I started to play big boy cricket and at 13 I played my first game in the Premier League in Namibia. It was a quick rise but I have never looked back since then. I played my first first class game at the age of 17. I think youngsters in England have a bit more of advantage because the age groups start at U7 and U9 and it gets them involved earlier” (indeed Stretford has u9 cricket so take advantage people of Stretford! -ed)

His first 1st class game was a proud moment for Danie and the excitement and expectancy he felt was a result of hard work over the years however, his first memory of the match was a reminder that you can’t do it all on your own in cricket and its a team game.

“The captain Nicholas Scholtz threw me the ball and sagely advised “it is your time now””. My older brother was standing behind the stumps. I was so excited and fuelled by adrenalin and I knew as soon as I released my first off-spinner that it was going to rip square. I can still can feel the ball coming out the hand . The ball took the edge of the bat but the catch was dropped at first slip. I finished wicketless in my first spell!”

During 2012 Danie’s brother, the late Raymond van Schoor, played for Stretford and took home a Stretford Cap and shirt which was placed in the family trophy cabinet. It was then Danie knew that he wanted to follow in his brothers footsteps.

“Raymond played for Stretford in 2012 and after that one of my biggest childhood dreams was to play for the Three Lions of Stretford. I always kept in contact the bloke where my brother stayed for that season because we had a few FIFA duels over the year. One day I received a mail from Stretford asking if I would play for them the following season . I could not believe it! I didn’t have to think twice because I had heard so many good things about Stretford from Raymond and Craig Williams who also played there. There is no doubt about it that my stint at Stretford was a major factor in helping me work towards my dreams of playing for my country”

“There were many up and downs in the first season. My cricket did not go as well as I wanted but the experience was definitely worth it . Primarily I learned to be more independent and that nothing in life is given to you . Its essential to understand that you need to put your head down and work for success. At the age of 19 I did not know much about life but Stretford welcomed me with open arms and I am still grateful for all the effort of the members and families who looked after me.

Stretford CC today means still means so much to me; like a family. Two players who I played with have been to visit me in Namibia which I really appreciated . Stretford helped to make me into the person I am today and I would hope that others would describe me as a honest , hard working and caring person . Always willing to help and assist where I can ; that’s the Stretford way in my mind”

“I came over to Stretford for a second season and did much better after learning a lot in year one. Things had changed a bit at the club with some old players returning and the strength in depth increasing. We had a new captain and also a new Director of Cricket but the captain left the club due to personal reasons mid way through the season. Following a team meeting , Guy the Director, put his faith in the youngster from Namibia and appointed me captain. We went on a good run in the league winning 10 games on the bounce with all 11 players playing vital roles in achieving promotion which was secured in a brilliant victory away at West Leigh on the final day of the season. It was probably my favourite match for the club – luckily I managed to score a few runs and take a few wickets -but when we turned up at the ground in pouring rain we didn’t think we were going to play. We needed to play and win to finish in the promotion spots having worked hard in the 2nd half of the season to move up from mid table obscurity. The joy on the players faces when Alex took the winning catch was something I wont forget . Personally the season was much better and I managed to take over 30 wickets but it was a great season for the team and my cricket improved.”

“The time at Stretford were two of the best years of my life and playing cricket. I had got to watch city play football which was something I thought I’d only seen on TV. To experience the culture was so enlightening. I had a brilliant time in Manchester and a lot of it was down to the people there and I never forget to catch up with the special people at the club.”

Danie was a considerate and well respected overseas player who always wore his heart on his sleeve for the club and although now working in insurance as an assessor is still involved with the National team and playing for United Cricket Club in the Namibia Premier League. We hope that in the future he is able to visit us again.