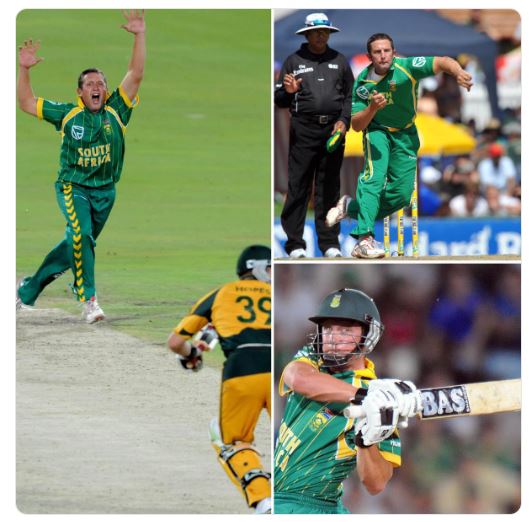 When Roelof van der Merwe was asked “where have you been all this time?” following his match winning Twenty 20 international; debut for South Africa against Australia in March 2009, his reply was fairly succinct but you could see the cogs turning for a suitable answer. With a grin he replied “I’ve been in the wilderness for a couple of years”.

The swashbuckling 48 he made from 30 balls, including four monster sixes was no surprise to anyone at Stretford who saw his raw talent first hand in the summer of 2006 when he signed for the club as a young overseas player at the age of 22 and again at the end of the 2007 season. Far from being in the wilderness, he was making a big name for himself in Manchester.

The year 2006 was Stretford’s most memorable season since their move to the Lesley Road ground and Roelof was massively influential in that title winning year as the club swept aside all comers under the captaincy of Chris Barlow.

“My time at Stretford was extremely memorable and I have such fond memories of the club. We played some really good cricket and we were well supported off the field”

Although Roelof broke all records in 2006 scoring 1349 runs at 71.00 including 8 fifties and 6 hundred and taking 63 wickets at 11 he also acted as a catalyst for home grown talents like Andrew Crowhurst (439 runs) and Chris Barlow (49 wickets) to thrive. His lively and energetic performances and larger than life character provided a spark for the club. Experienced players such as Mike King and Chris Turner (900 runs) also weighed in heavily showing that the club had a great mix of players with plenty to offer both on and off the pitch

“I joined the club as a young man and I had never travelled away from South Africa before but the club made me feel right at home straight away all the way through my stay there for one and a half seasons. 2006 was immense”

The Stretford faithful will probably agree that Roelof was an absolute one-off in terms of his effect on the whole club. The way he played hard cricket with such a smile on his face was a joy to behold. He left Stretford with a bagful of runs the size of Jupiter and was the bringer of much joviality.

“The two years at Stretford, and the experience it gave me was so important. It gave me a solid base to work from and fortunately I am still able to enjoy the game of cricket as a professional 13 years later”

In making his debut for Netherlands in 2011, Roelof became only the 12th player in history to play for two international countriesin ODIs alongside some illustrious names like Kepler Wessels, Ed Joyce and Luke Ronchi however, no matter who he plays for and when, he leaves a lasting mark on any team thanks to his bull dog spirit, will to win and box office talent.

The Stretford faithful always keep an eye out for Roelof and he’ll be representing Somerset in 2020 and playing for Netherlands in the T20 world cup in Australia in October next year. Good luck pal!!

the friends of SCC: Mitch Williams